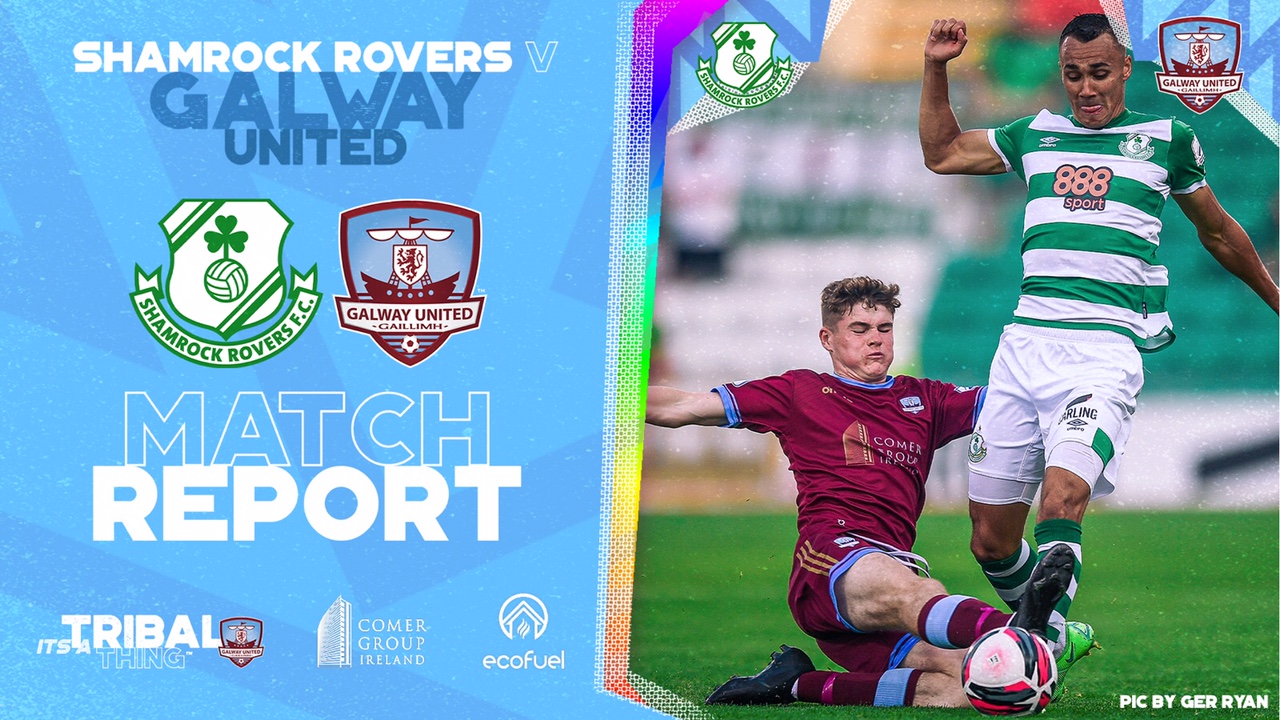 “Tonight was a good indicator of the standards the players have to reach.” – John Caulfield, Manager

A spirited Galway United exited the FAI Cup at the hands of a relatively comfortable Shamrock Rovers on a beautiful summer’s evening in front of 500 or so fans in Tallaght.

Goals from Tuam native Rory Gaffney and Dylan Watts had Rovers barely out of second gear after a quarter of the game, with United struggling to get any foothold in the game, but they grew in confidence in the second half.

This was a shot to nothing for the visitors, who were unable to deal with the league champions in the first half, but they will gain confidence from their second-half showing: they were the better side, albeit with Rovers in control.

The 2019 Cup winners Rovers played pretty much their best 11, illustrating what this competition means to a team fighting on three fronts this term, with United, whose only trophy of note came 30 years ago when they shocked the Hoops in the FAI Cup, hit badly by injuries and suspensions. They had little to lose, with promotion from the second tier the main aim this season.

The 17-year-old Alex Murphy was yellow-carded on only two minutes after a late challenge on a breaking Graham Burke – ominous for the underdogs. Murphy then slightly overplayed the ball and fouled Richie Towell, which had the youngster worried.

The opening goal arrived on 17 minutes. Rovers played it around before Towell crossed and Gaffney slotted the ball into the net.

The game was seemingly over as a contest on 21 minutes, Gaffney pivotal to find Gannon, whose cross was hooked in by Watts, Burke waiting to have a go if his team-mated didn’t.

Rovers looked to have the game won already and the promising Murphy was taken off on 31 minutes, United boss John Caulfield conscious that he was on a yellow and there are bigger games ahead. Just before half-time, Burke lashed the ball across goal and it looked as though Conor Kearns had bundled into his own net at the near post, but the ball was scrambled away.

Maurice Nugent was one of United’s better players in the opening period, cutting out a couple of key attacks before the break, with Gaffney almost pouncing on a mistake before the break to make things worse for the visitors.

Ex-Hoop Thomas Oluwa was a notable substitution for Waweru at half-time, United fans at least able to see what to make of the pacy signing from Bohemians.

Another nice move from the right-hand side nearly yielded Rovers’ third on 49 minutes, Gannon’s superb cross met by Towell, who was narrowly off target in front of the Rovers fans.

Oluwa made a brilliant start to the second half and his United career, playing the ball to fellow and lively substitute Caoilfhionn O’Dea, whose low drive prompted a Mannus save. Rovers soon resumed their dominance, Burke blasting at Kearns who bundled away.

United were desperately unlucky not to equalise on 70 minutes. Sensational stuff from Mikey Place showed what he can do in possession, showing superb control and then passing across the park for Keating, who rattled Mannus’ post; United broke again quickly and Keating forced Mannus to save.

Keating, quiet in the first half, had come alive and he turned superbly on 78 minutes, with Mannus producing a superb save. Keating’s fellow Mayoman, the tireless Gary Boylan, would never give up for United and kept on trying in the final minutes, even if the game were up.

And so, Rovers greet 15 other sides in the next phase; United’s quest for a trophy goes on. But both sides will take satisfaction as the heatwave meets its conclusion with a lot of football to be played this season.

“It was good for us to go to the home of the champions who have set the standards the last number of years.

“We are trying to bring professionalism into the club, both on and off the pitch. Tonight was a good indicator of the standards the players have to reach.

“Overall I thought it was a very positive night for us. A lot of lads were missing but the players that came in did brilliant which was fantastic.

“The guys came out for the second half and were much better. There were a lot of positives this evening and we could have scored in the second half which would have brought us back into the game.

“We have a massive run into the end of the season with huge games to play. We go to Wexford next weekend. We have to make sure we go there with the right attitude to win the match.”