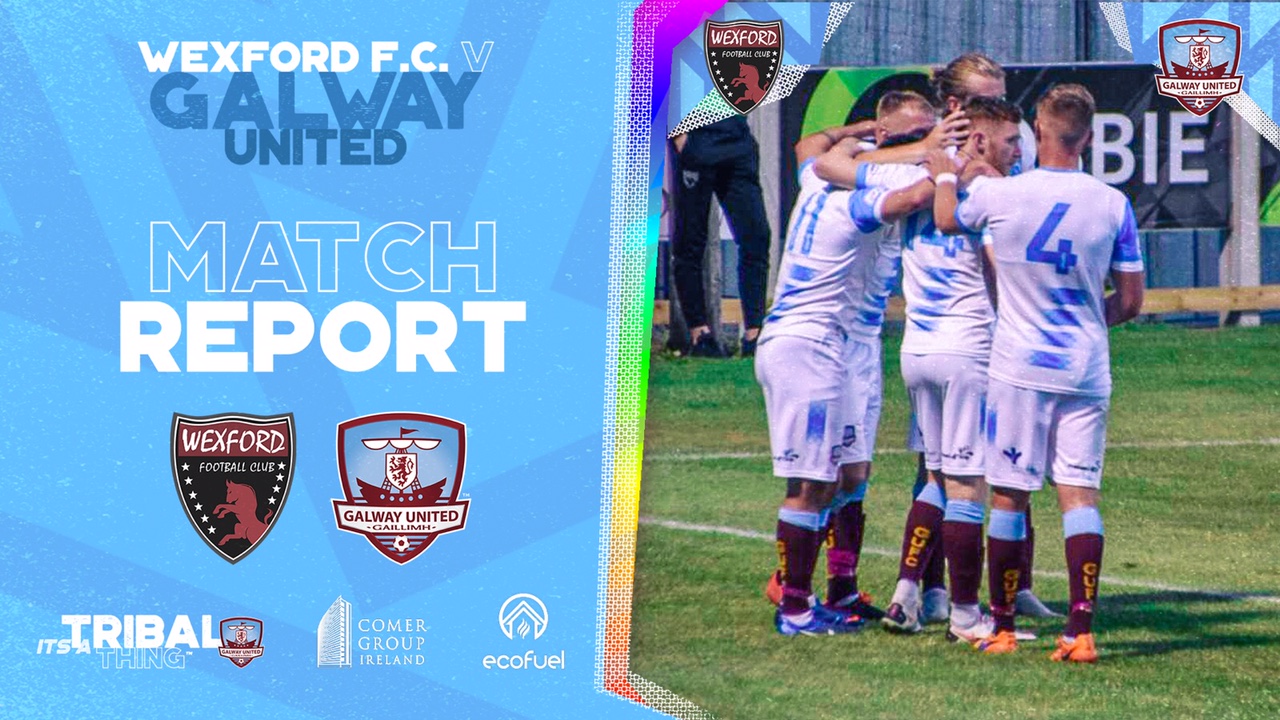 Galway United make it seven games unbeaten after a dominant second half secured victory at Ferrycarrig Park. Three second half goals gave United a well-deserved win after Wexford took the lead on the stroke of half-time.

It was a cloudy evening in Wexford as both sides struggled to make an impact in the opening exchanges.

United thought they had broken the deadlock in the 21st minute when Ruairi Keating finished past Jimmy Corcoran after a fine cross from Mikey Place but the linesman’s flag was raised to rule out the goal.

A second ruled out goal came seven minutes later. This time Place finished into an empty net after Corcoran made a point-blank save from Keating but once again it was adjudged to be offside.

It was a more even ending to the half as United looked threatening down both flanks, in particular through new signing Thomas Oluwa.

The opening goal did come just before the half-time whistle, but this time for Wexford. Lorcan Fitzgerald picked out Jack Moylan with an inch-perfect pass and Moylan made no mistake as he confidently struck the ball past Conor Kearns to give Ian Ryan’s side the lead before the break.

United came out a different outfit for the second period. John Caulfield opted to make two substitutes for the start of the second half which changed the course of the game.

Substitute Padraic Cunningham came on like a man possessed as he pressed from the front early on and brought real intensity into United’s play.

The striker brought the Tribesmen level ten minutes after the interval. Place did well down the wing and laid it off to Cunningham who hit a rocket with his left foot into the bottom corner, leaving Corcoran with no chance.

The momentum was with the away side now as they hunted for their second goal. The crucial goal came in the 65th minute after the ball fell to Killian Brouder in the penalty area and the defender tapped into an empty net to give United the lead.

The home side came back into the game as the game entered the closing stages but United looked dangerous on the counter-attack with a third goal looming.

The match was put to bed in the 79th minute when the ball landed to lively substitute Shane Doherty in the box who struck a sweet volley into the bottom corner, once again leaving Corcoran with no chance.

It was an assured second half performance from the Tribesmen who take all three points back to the west.

“It was a game I was worried about all week, Ian has done a great job since he has taken over and made them into a good side.

“Wexford played very well in the first half, we weren’t at it as much as we have been over the last number of games. It becomes a difficult match when they score just before the break.

“We were much better in the second half; we got our energy back and we played on the front foot. Podge got a fantastic goal and the momentum was with us then.

“The subs that came on made a big impact and we needed that tonight. The lads showed huge character to bounce back. We are happy to get out with the three points.”

Our next First Division game is home to Cork City on August 6th.