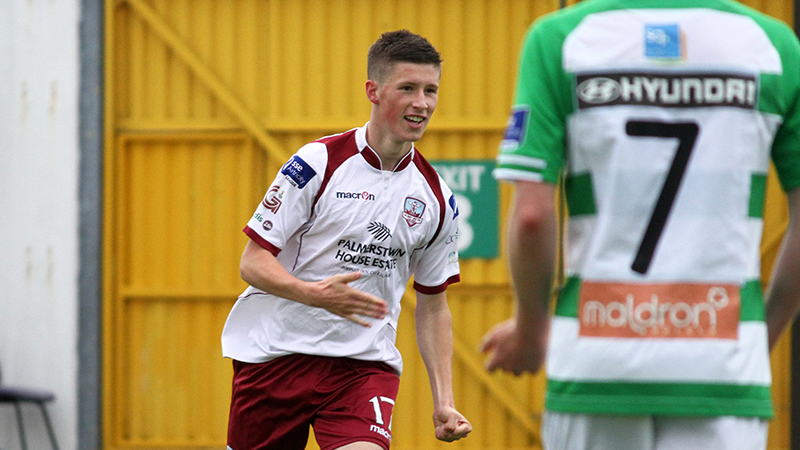 Galway United goalkeeper Kevin Horgan got a strong hand to Sean Boyd’s penalty but United players didn’t react and Morgan swooped in to apply the finish.

After United went down to 10 men, Rovers upped the ante and they took the lead in spectacular fashion. Dean Kivlehan was teed up at the edge of the box with a well-worked corner routine and he found the top corner with a strike out of the top drawer.

United got back on terms through substitute Joe MaClean, his former teammate at Moyne Villa, Adam Quirke, set him up, and he muscled his way through on goal before firing low and hard past Mikey Quinn.

Johnny Glynn’s side made a bright start, Robert Carroll attacked Antaine O’Laoi’s corner kick with a powerful header but it was straight at Mikey Quinn.

Shamrock Rovers midfielder Eoghan Morgan was totally unmarked in the box, and when he was picked out, he headed wide when perhaps he could’ve done better.

Dean Kivlehan drilled a ball across the six yard box, Shamrock Rovers winger Eoghan Stokes slid to make a connection but he couldn’t reach the ball.

Three minutes into the second half, Kevin Horgan produced a fantastic save to deny Dean Kevlihan. Kevlihan’s inventive effort was destined for the top corner but Horgan somehow palmed the ball around the post for a corner kick.

United centre-back Maurice Nugent was then given his marching orders by referee Marc Lynch for a mistimed tackle.

The Hoops hit the front in the 74th minute. The ball was rolled to Dean Kevlihan at the edge of the box and he curled an unstoppable shot into the top corner.

Aran McConnell dropped into the centre of defence after Nugent’s dismissal and he saw his header land of the roof of the net after flicking on Gary Kinneen’s free-kick.

United got back on level terms through substitue Joe MaClean in the 78th minute. Adam Quirke played a ball behind the Rovers defence, MaClean bustled his way through on goal before firing low and powerfully past Mikey Quinn.

Joe Hynes broke away down the right flank before delivering a pin-point cross to the back post, Gary Kinneen tried to measure his header and cushion the ball into the far corner but he failed to keep the ball down.

United were then dealt a sickening blow when Aran McConnell handled the ball in the box, referee Marc Lynch pointed to the spot and Sean Boyd assumed the responsibility from 12 yards. Boyd shot low and hard, to Horgan’s left, United’s netminder guessed right and he pushed the ball away from goal but Eoghan Morgan was the quickest player to react and he squeezed the ball past Kevin Horgan to seal a valuable three points for Shamrock Rovers on the road.