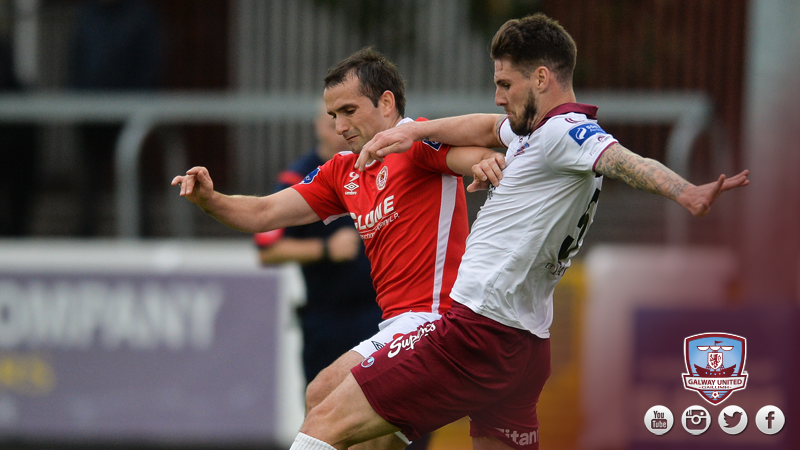 A Christy Fagan goal in the opening minutes settled affairs at Richmond Park on Friday evening, in a game that United will feel they should have at least shared the spoils.

Just three minutes in St Pat’s hit the front when Christy Fagan fired home low into the far right corner, having been given too much time to shoot inside the box.

Sean Hoare had a chance minutes later but headed wide despite being unmarked.

Just before the ten minute mark, Conan Byrne caught Conor Winn off his line, but his effort was weak and directed off-target.

United had their first chance of note on twelve minutes, when Ryan Connolly drove up the middle before unleashing a shot that narrowly cleared Brendan Clarke’s crossbar.

25 minutes in, Vinny Faherty had a great chance to level it, getting on the end of a Ryan Connolly cross, but his weak header was saved by Clarke.

Connolly had a chance himself, as he shot at Clarke’s near post from a free hoping to catch the St Pats’ ‘keeper out, but it was gathered easily.

With just over five minutes left in the half, Jamie McGrath won possession deep in United territory, and he advanced towards goal, but Conor Winn was equal to it, saving well.

In injury time, Stephen Folan headed a Ryan Connolly free across goal and was eventually met by Kevin Devaney, who volleyed goalward, but his effort was saved.

United made an improved start to the second half and had a chance through Vinny Faherty who just cleared the bar with a looping header from just inside the box.

Halfway through the second half Paul Sinnott had a chance to score shooting low with his left, but Brendan Clarke saved.

Second-half substitute Enda Curran had free on the edge of the box blocked down, before the rebound was drilled wide by Ryan Connolly.

United dominated the second half and pushed for a leveller, but it never came.