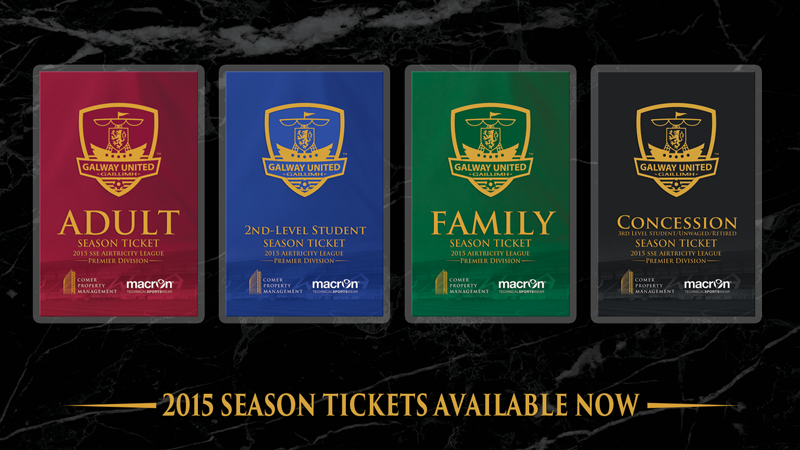 Galway United are back in the Premier Division and we would love to see you at Eamonn Deacy Park next season!

Eamonn Deacy Park will continue to be a family friendly ground in 2015, we are offering supporters massive savings on a family season ticket offer that will gain two adults and two second level student’s admittance for a vastly reduced rate.

We are delighted to announce that supporters U12 will continue to gain free admittance to Eamonn Deacy Park in 2015 when accompanied by an adult.

Purchasing a Galway United season ticket will allow supporters to make massive savings compared to paying in on a match by match basis.

Galway United Season Tickets are currently on sale from the office behind the Comer Stand at Eamonn Deacy Park between the hours of 10am-1pm and 2pm-5pm, Monday-Friday.

Season Tickets can be purchased from O’Brien’s Newsagents on William Street (CASH ONLY).

The Square Inn pub in Athenry and the Oakland Hotel in Glenamaddy are now selling Galway United season tickets.

If supporters have any season ticket enquires they should contact the Galway United club office at (086) 3301907 between the hours of 10am-1pm or 2pm-5pm, Monday-Friday or e-mail the club at info@galwayunitedfc.ie.