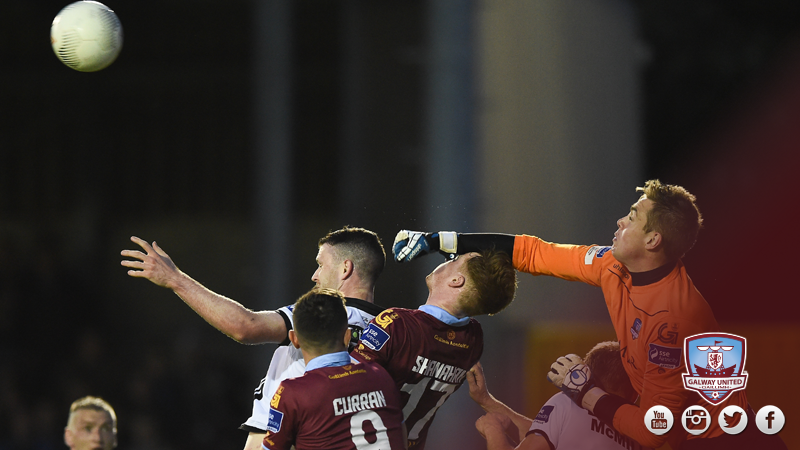 Conor Winn felt Galway United earned a hard-earned point away to Derry City on Friday night and the 6’6 netminder was pleased to keep a clean sheet after a run of losses.

“I think the Brandywell is one of the hardest places to come to in the league,” he explained.

“I knew I was going to be in for a busy night. The lads playing in-front of me were absolutely brilliant, they threw themselves in-front of the ball.

“Some people will say we’re lucky to come out of here with a point, but we trained all week for this, it was hard, but I enjoyed it.”

Vinny Faherty was denied by a crucial Ger Doherty save mid-way through the first half, Winn felt his teammates fashioned chances and that they displayed a grittiness in the second half to thwart the Candystripes.

“We had the better chances in the first half, I’m delighted to keep a clean sheet, it’s my job.

“To do it up here against a good side is even better. We had three defeats in-a-row so we needed a result, the supporters who came to the game saw how much heart the players put into it. I know people may be doubting us, but we all love the team and we want to push forward.”

On Tuesday Shamrock Rovers are the visitors to Eamonn Deacy Park and Winn sees no reason why United can’t get a result against the Hoops if they apply themselves once again.

“We still have our goals, we’re looking to finish in the top half and catch the teams above us. We slipped up against Sligo, but if we keep working hard like we did tonight, we’ll have no problems in the league.

“It’s going to be a battle against Rovers on Tuesday.”